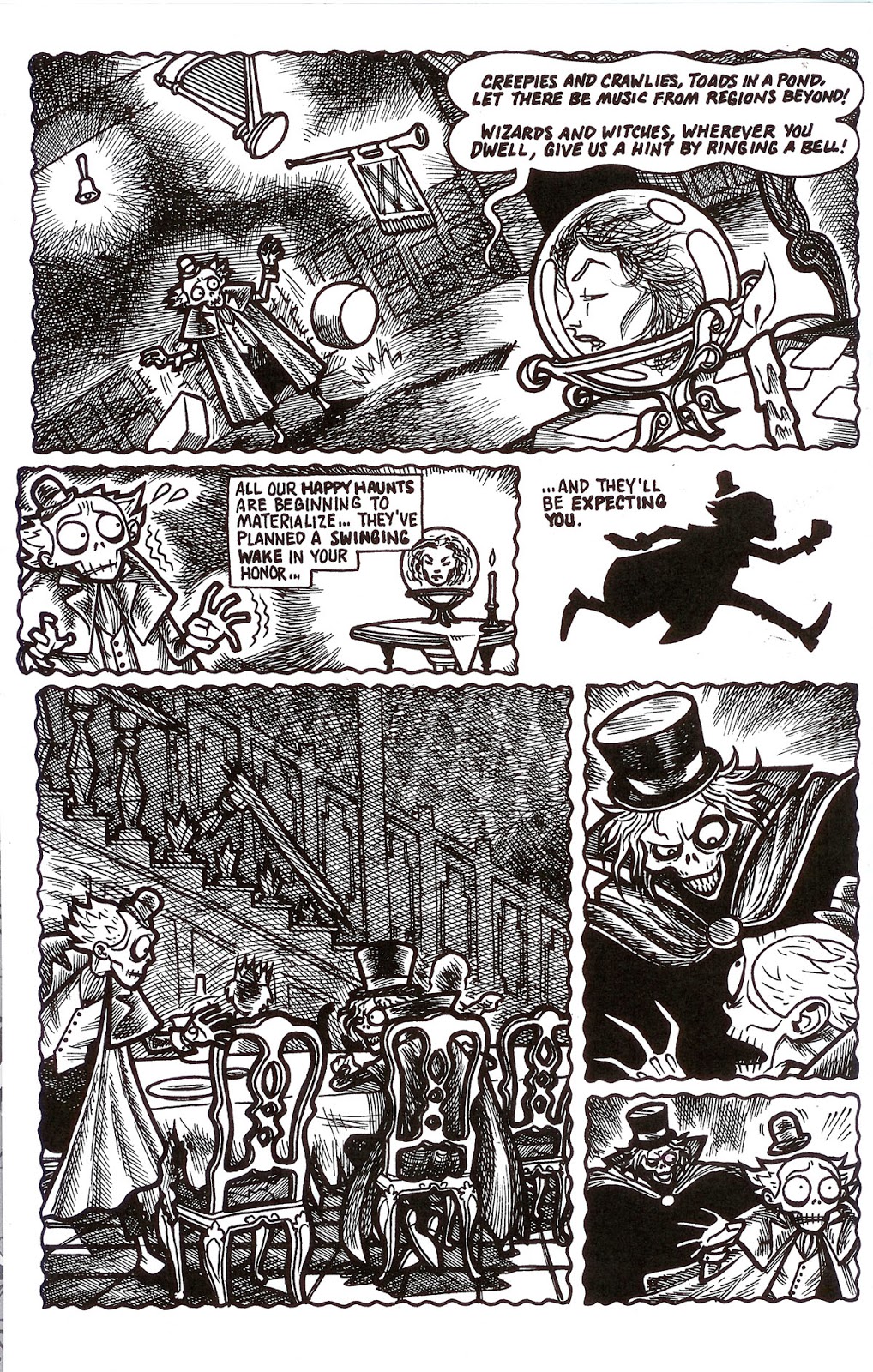 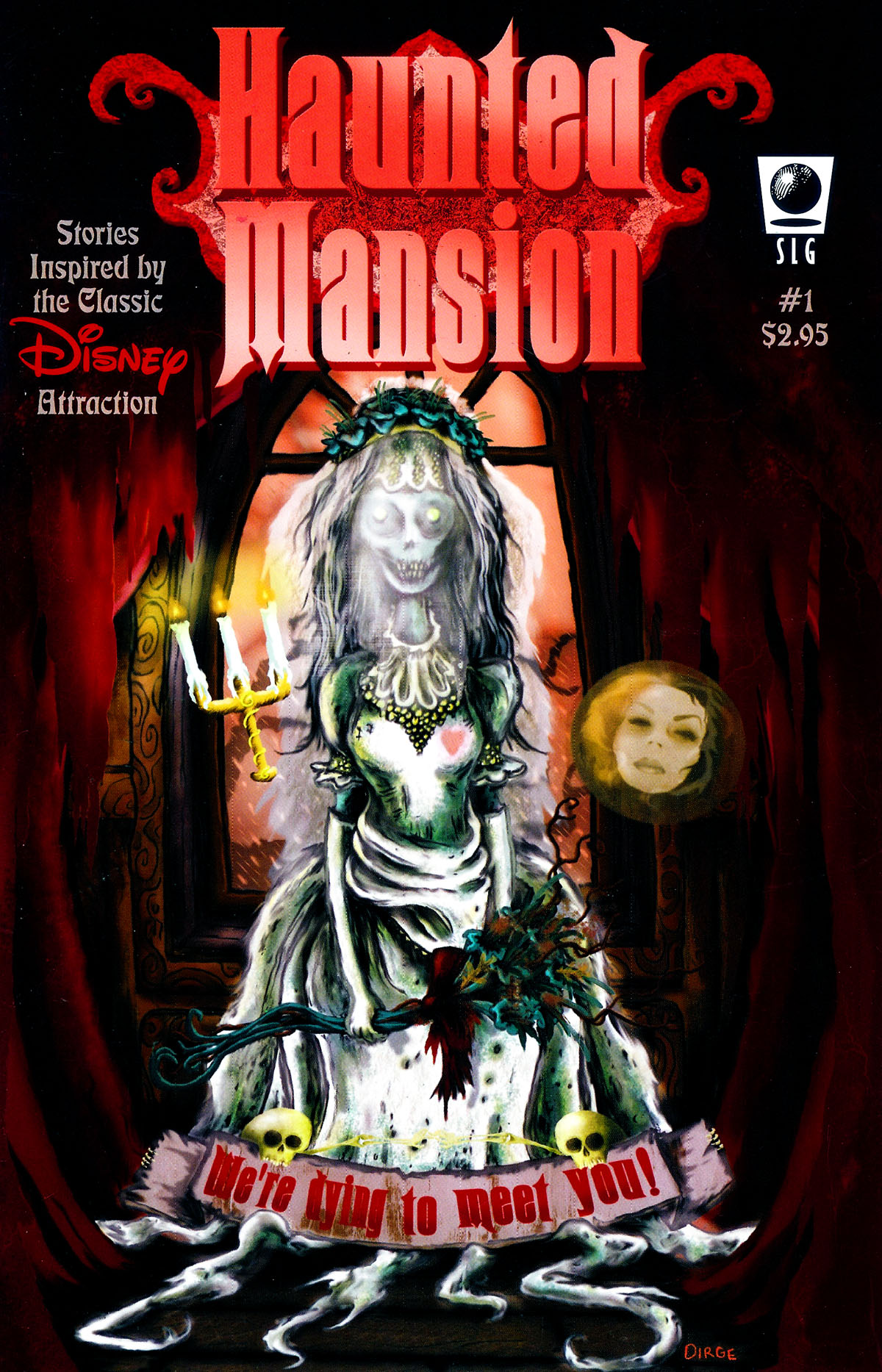 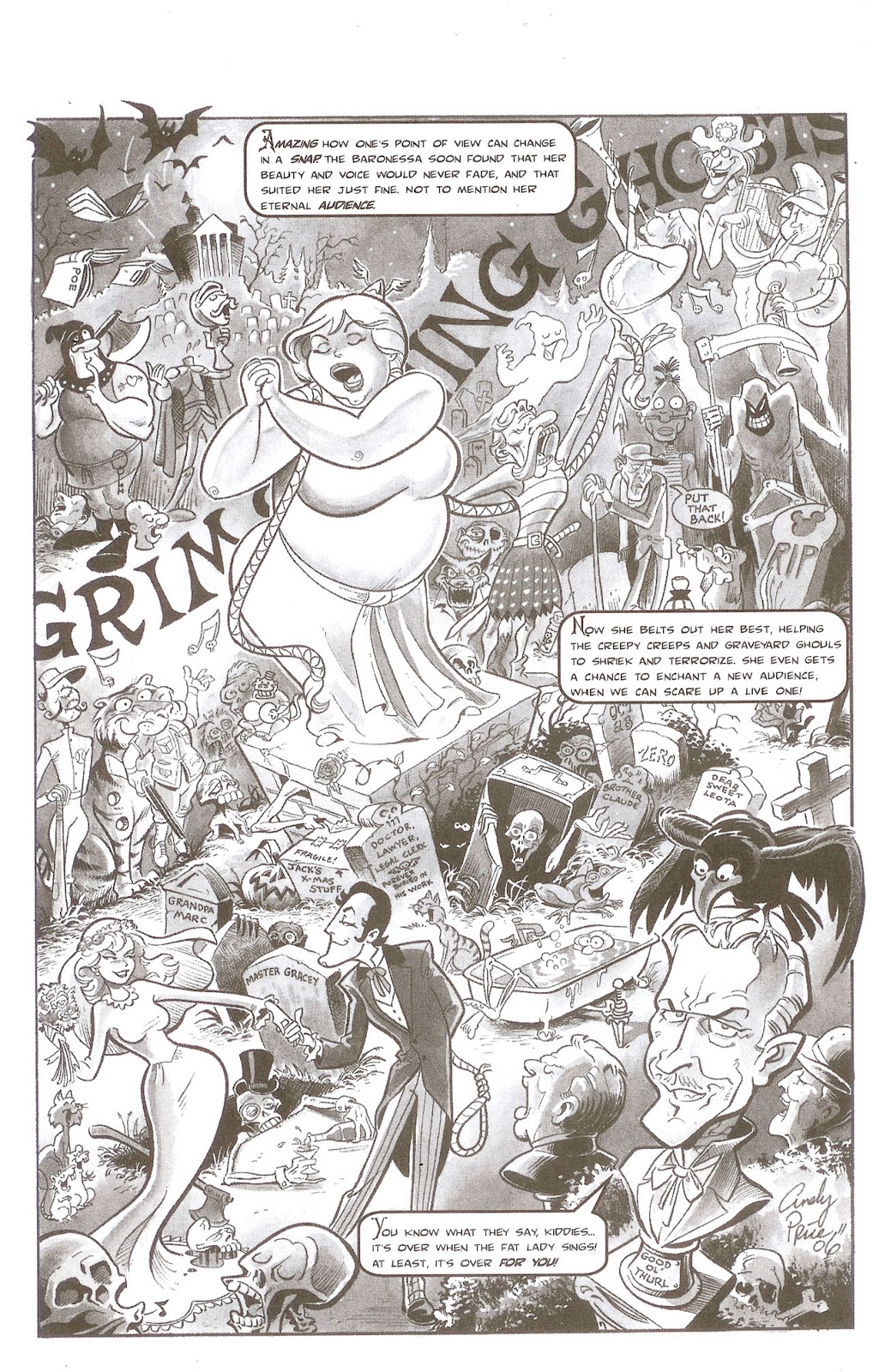 Owned: NO, but can be read online!

Released in the mid-2000s by Slave Labor Graphics (a... strange company name, I have to say), the SLG Haunted Mansion comics featured 7 (8?) issues with about 4-5 individual stories in each. The comics mostly told the backstories of many of the most famous and iconic ghosts of the Mansion alongside lighthearted slice-of-life (death?) segments here and there, with a different artist doing every story.

Overall, I'd say this series is decent. There are some fun stories and interesting, varied art styles throughout, but... I don't know, a lot of it seems too strange and out-of-character for its inspiration.
I'd say the accuracy towards the original ride is pretty alright. There are a few stories that actually just run through the entire thing but with a character going through on foot or whatever, and of course a few lines from the ride script are used. Overall pretty accurate I guess, but there was one comic where what was supposed to be the original mansion was replaced by Phantom Manor for the exterior? Not sure why, but whatever.
The thing I like the most about the SLG series is definitely how unique and interesting each comic looks. Of course, I'm not a fan of every single one's appearance, but I do think it was a really cool idea to have so many different artists contribute their own versions. Also, shoutout to the Mystery of the Manse miniseries for pretty much looking like a Haunted Mansion manga lol.
Being more of an anthology than anything, the SLG series doesn't have much of a central plot; if anything maybe a multi-part story split between different issues but nothing big. The individual stories range from funny to strange to just... "huh???" (for example, the one where after reaching 1,000 residents, the mansion literally just... imploded and went straight to hell for some reason. not even kidding.) Some stories are entertaining and fun, but a lot just seem too off, out of character, or generally super wierd.
Well, considering that the entire thing pretty much focuses on and prominently features nearly all of the canon ghosts, I'd say they're treated rather well! Although, as I've said before, I'm not really a fan of the backstories and personalities given to them in most of it. But, I am definitely glad that they're given the spotlight throughout the majority of the entire series, rather than having some new and/or mortal character completely stealing their spotlight. One thing that really bugs me, though, is how for some reason Madame Leota is always personified as not knowing she's dead??? I have NO idea why this was considered canon in so many of the stories but it's just... no. Why. Don't like that.
There were quite a few new characters introduced, most of which were just mortals getting involved and then dying in their own one-off stories. To be honest, I don't find any of them to be really likable or even... noteworthy, really. The only one I really liked was the unnamed 1,000th ghost in the first mini-story, Room for a Thousand, (see first image above) which is honestly my favorite story of the bunch.
In all honesty, I really just like making fun of the SLG comics. There are plenty of meme-worthy panels throughout the stories which I appreciate greatly, and it's really just fun to laugh at. Some of the stories are genuinely enjoyable, but I mostly read it for the weird bits.
I definitely DON'T consider any of the SLG stories canon, especially since I'm pretty sure most of them don't even take place in the same timeline. The only piece that I (and many others) consider canon would be the name of the Beating Heart Bride, which was revealed to be Emily de Claire in Mystery of the Manse. Some also take the Hatbox Ghost's name (Randall Pace) from there as well, but not me, personally. I'm not a fan of pretty much all the backstories presented, so I don't really regard them as being the ghosts' actual backstories. 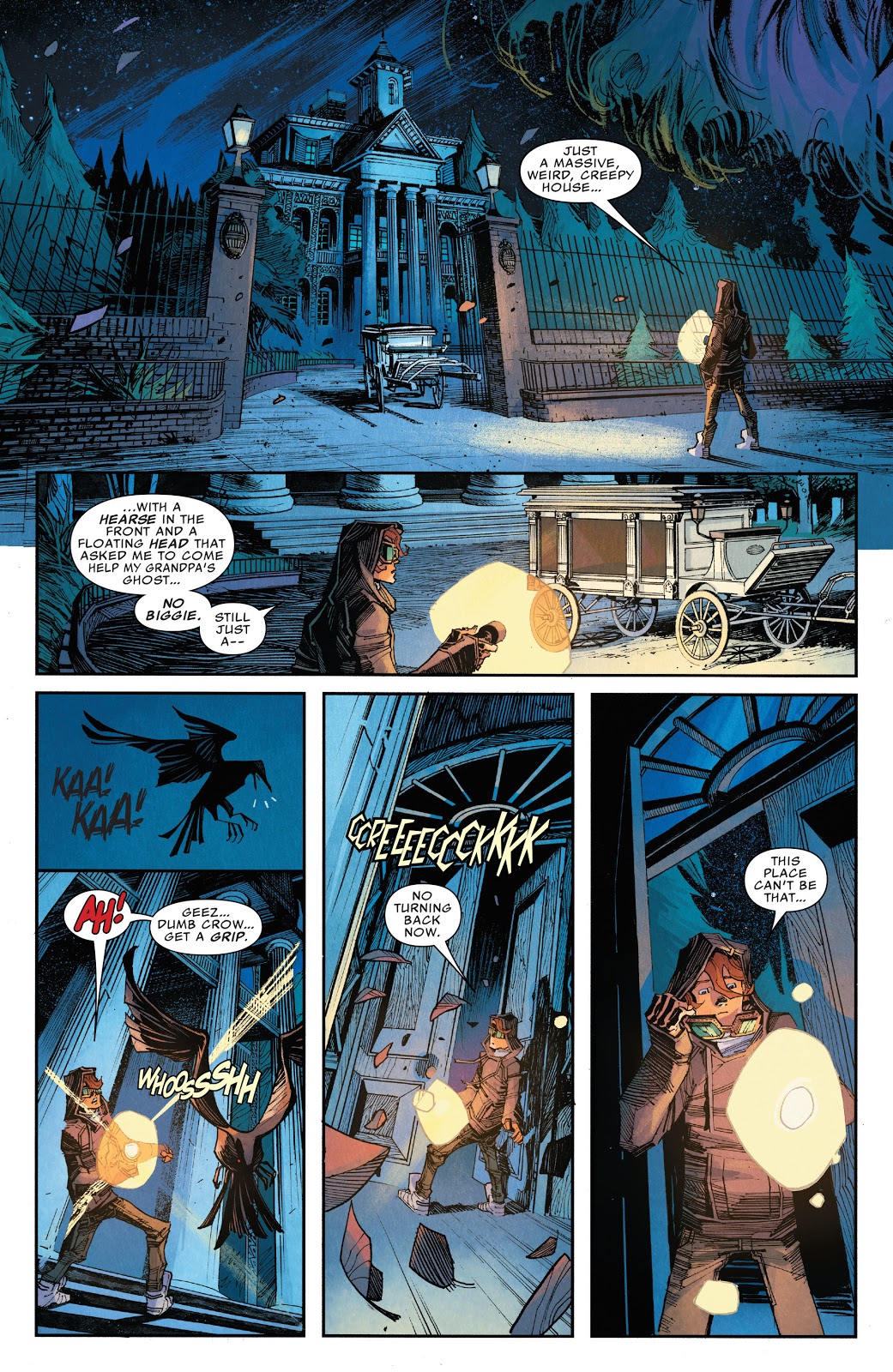 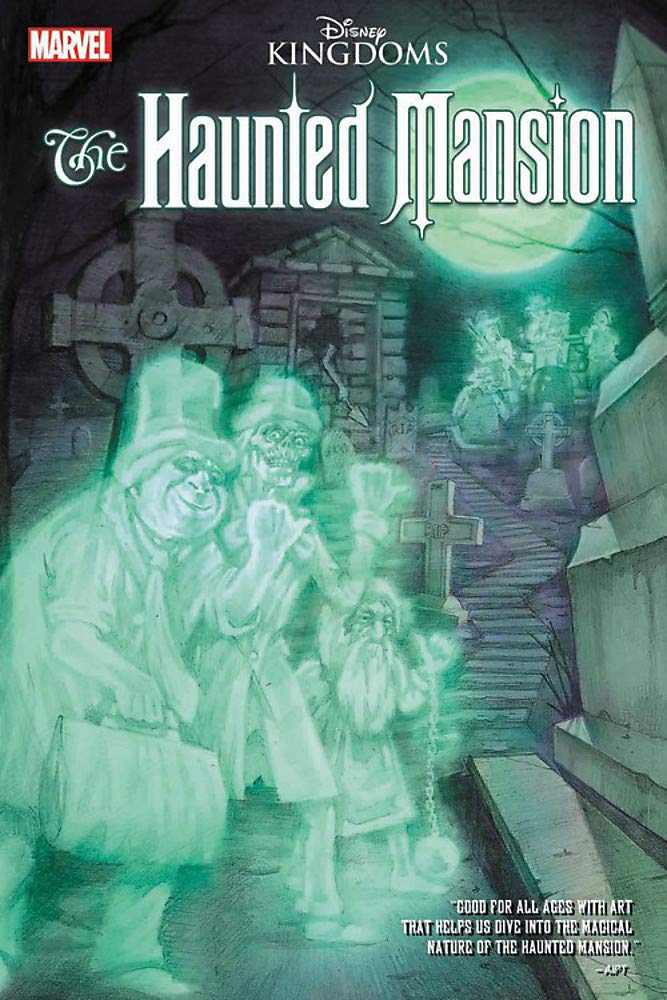 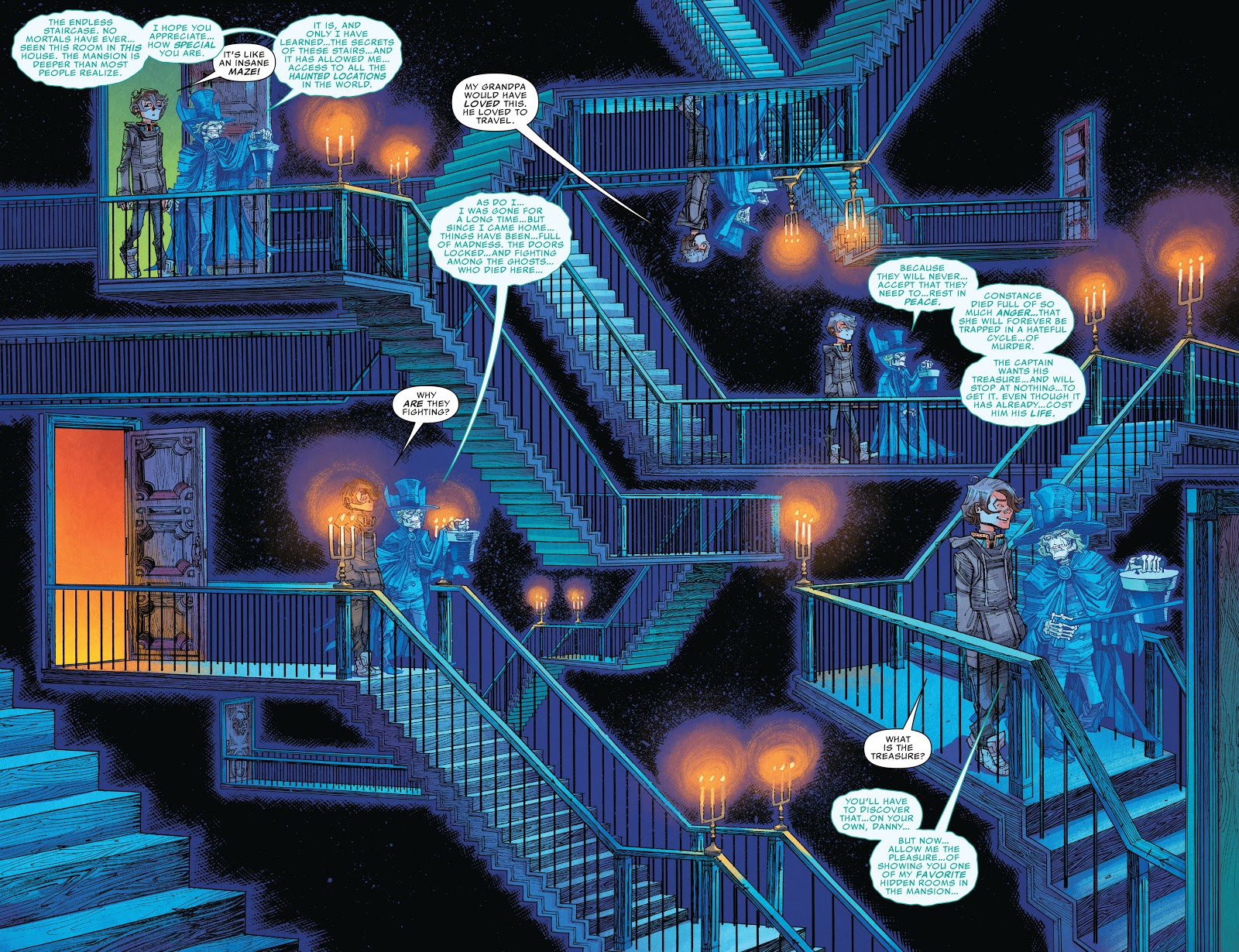 Part of the Marvel Disney Kingdoms universe (which also includes stories inspired by Journey into Imagination, Big Thunder Mountain, the Museum of the Weird, and the Enchanted Tiki Room), the Kingdoms Haunted Mansion series tells the story of a New Orleans teenager named Danny who, after his beloved grandfather's passing is lured into the mansion by Madame Leota in order to help break a curse trapping all the ghosts inside. Captain Gore, a character from the original ride concept for the Mansion, is featured as the main villain alongside Constance Hatchaway.

Honestly? I do like this comic quite a bit! It's got a neat artstyle, decent plot, and involves a lot of the characters that the fans know and love.
Overall, this comic's interpretation of the Mansion itself is pretty accurate! It's set in New Orleans, referencing the New Orleans Square land the original's located in, and uses a lot of the most famous scenes as settings for the main story. I do especially love how they included the Endless Stairway- it gets its own wonderfully detailed two-page illustration (see image 3) that I think is really cool! And of course, there's a scene in which the main character goes through a part of the ride on foot. Not necessarily a bad thing, I just think it's so funny how there *has* to be a reference to at least one of the actual ride scenes/quotes in every comic haha.
I really love the illustrations used for this comic. Sure, some of the distance renders/zoomed-out shots of characters look a little funny, and there are some odd character design choices, but overall the style is super interesting! The cross-hatch shading and line details adds a very cool effect to the artwork, and generally the sharp and angular designs work well with the spooky theme. The various different covers are interesting too. Some are original concept art from the ride, while others are from other artists. Shoutout to this one cover featuring, uh... a very muscular version of Ezra the hitchhiker? (Not sure why he's built like a superhero here... or why he's, uh... naked in a bookshelf??? Let's move on.)
Alright, one thing you're probably gonna hear a lot from me is how I despise Haunted Mansion stories where the ghosts are basically just cursed to stay "trapped" in the mansion and that they need some random mortal(s) to come "rescue" them and break the curse. Like... they're supposed to be the 999 HAPPY haunts who love to party and entertain guests! Ugh, whatever. Where was I? Oh yeah. So, if you haven't guessed from my little rant, the Kingdoms series centers around the ghosts being cursed to be trapped in the mansion by the vengeful spirit of pirate Captain Gore, who has been searching for a fabled treasure within the mansion. Danny, the protagonist, is called to help by Leota with the promise that he'll be freeing his deceased grandfather's spirit as well. It's... not the worst plot, honestly? It is interesting, but the whole "curse" thing has been done a few too many times (at least 3) and I'm a little tired of it.
Eh, not bad. The characters' personalities range from ones that seem like they'd fit, to ones that are really exaggerated and unfitting. An example of the latter would be Constance; she's portrayed as a wedding obsessed madwoman who loves to (at least attempt to) behead every man she sees, even if they're already dead. I'm just not a fan of her entire presence in this comic. My favorite featured character, however, is the Hatbox Ghost. Yes, I'm a little biased because he's my favorite out of all the ghosts in all media, but I really like how he's portrayed! He makes a short but prominent appearance where he rescues Danny from the cursed ballroom, and explains the whole situation that's been going on while taking him through the Endless Staircase. He's a pretty neutral character, and doesn't take sides at all; one minute he's helping Danny out and giving him advice, the next he's vanished and left Danny right where Captain Gore can find him. I do really like the idea of him being neutral but mostly helpful, and the few pages he's on are admittedly my favorites (see image 3 for an example). Plus, the way Hatty's dialogue is written is interesting (in a good way); he tends to trail off...Every few words...which gives him sort of an... "old and tired of everyone's crap" vibe, which I love haha. 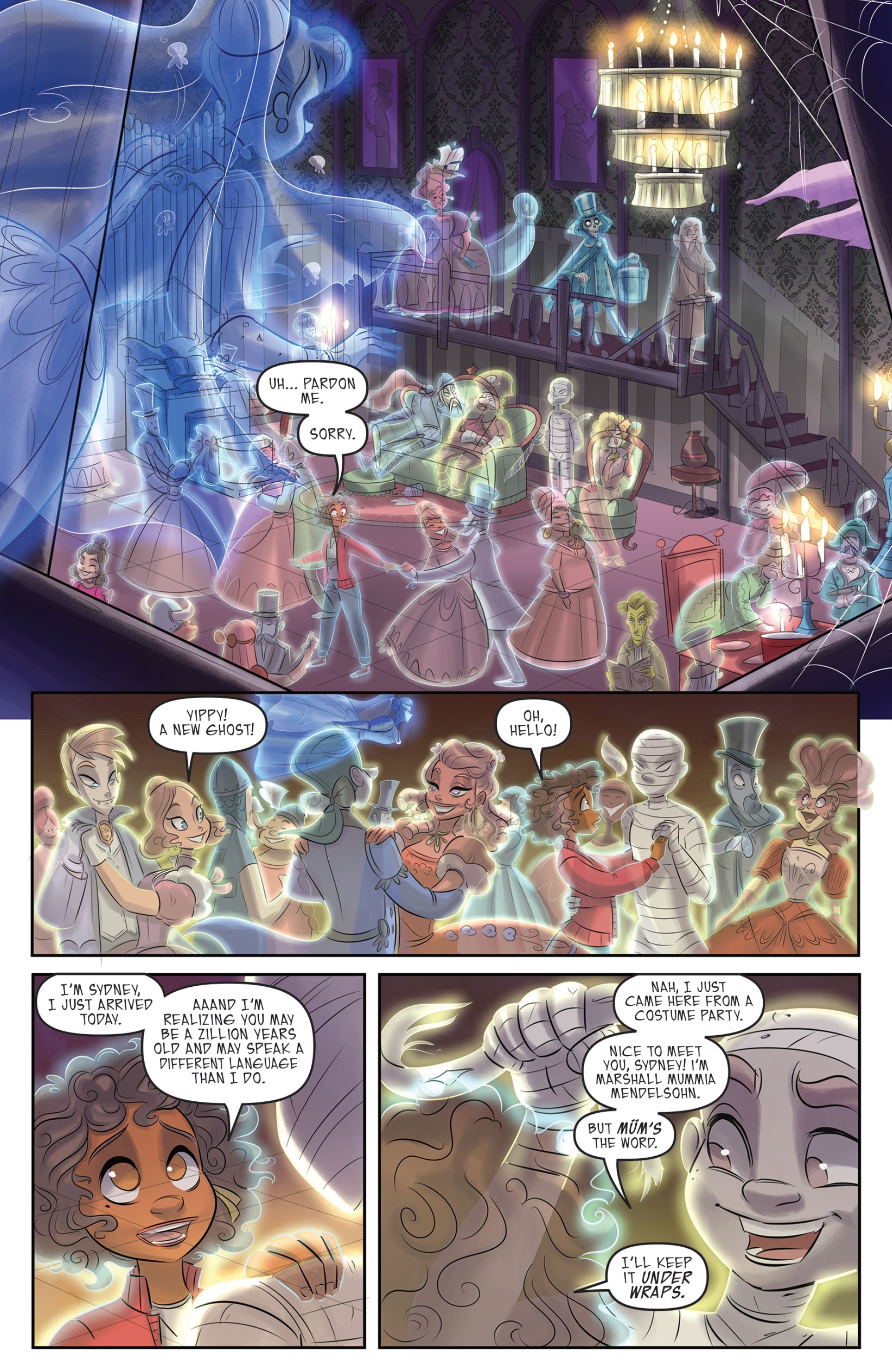 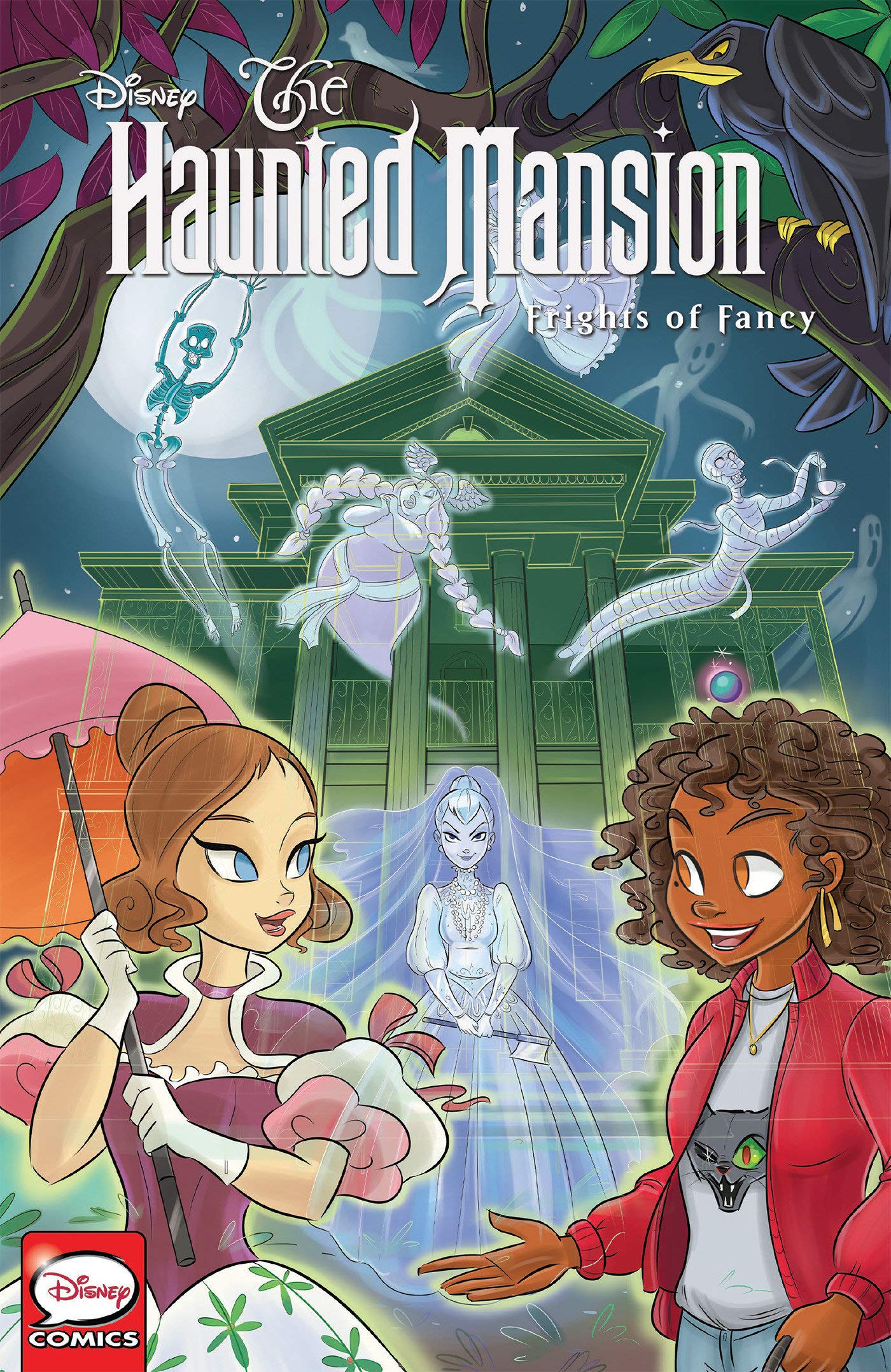 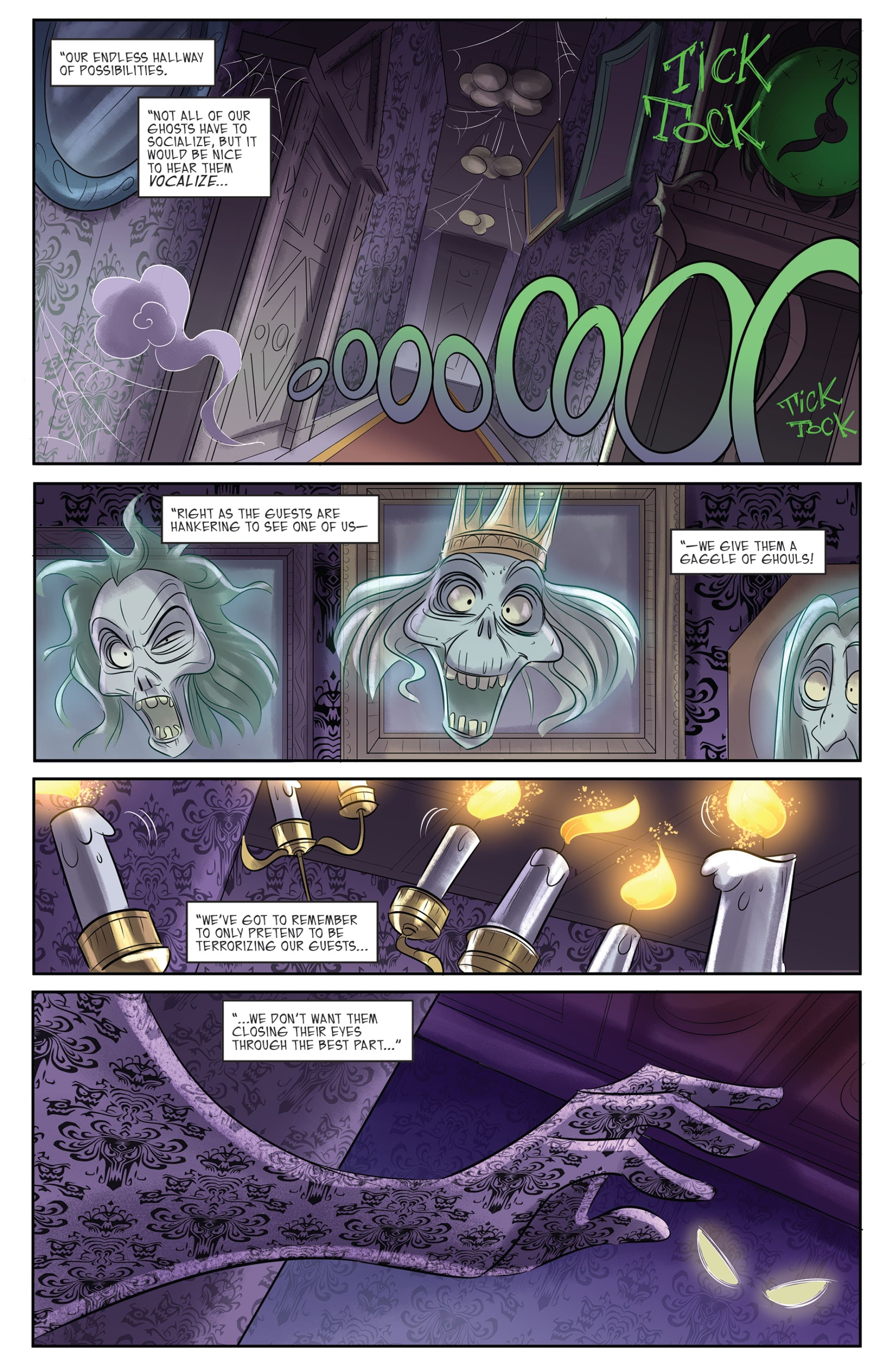